“As a stand-alone parcel it is spectacular. Tied in with abutting protected properties it is the crowning touch to a fantastic resource and Greenway. Lyme should be proud.”
— Former First Selectman Ralph Eno, August 2021

The official dedication of the Town of Lyme’s Johnston Preserve was held Wednesday, Aug. 18, with 17 members of the Johnston family in attendance. In addition, the preserve received the esteemed honor of being formally inaugurated into the national Old-Growth Forest Network (OGFN), a national network of protected, native, publicly accessible mature forests. 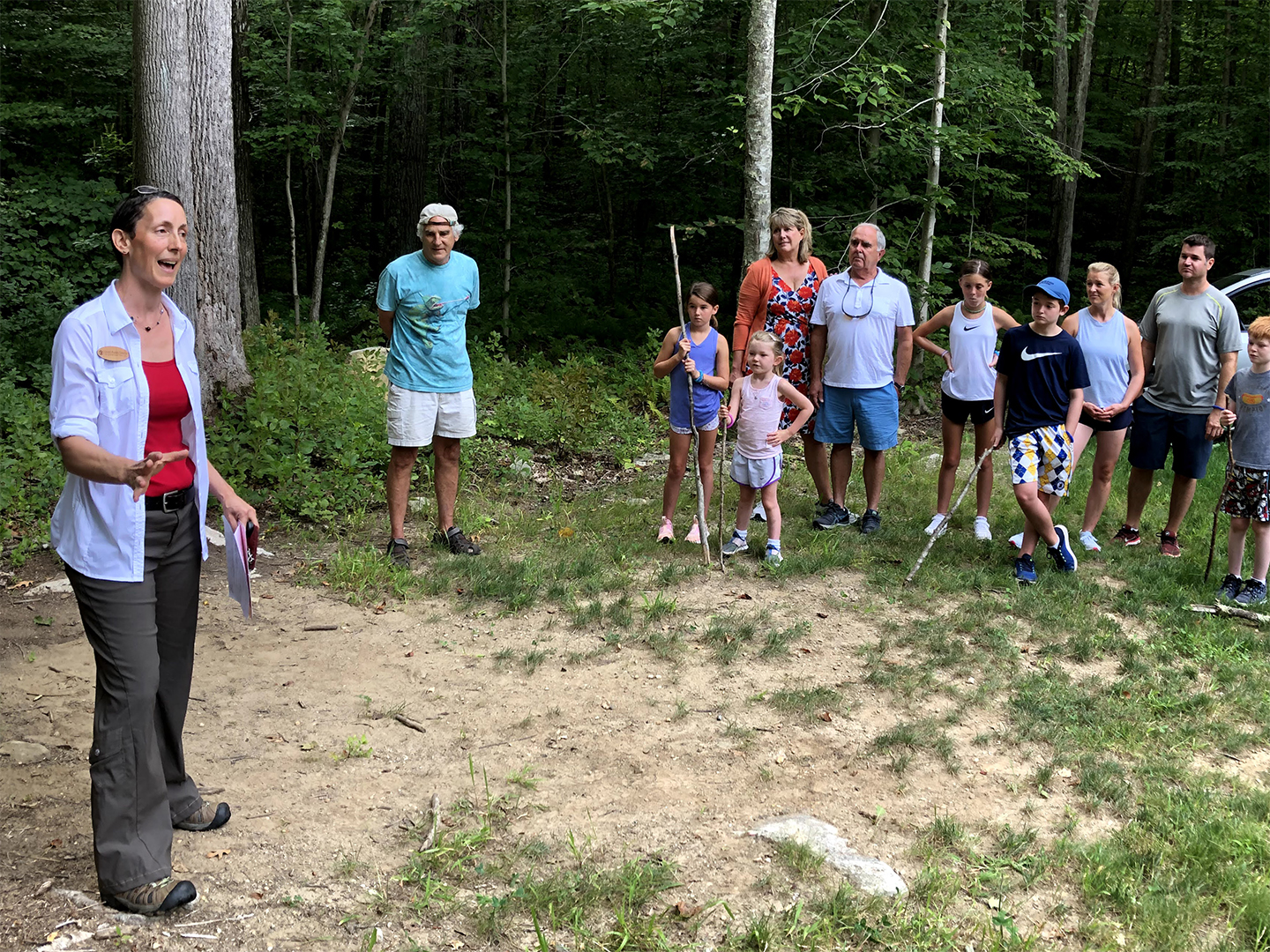 Although the Johnston Preserve has been open to the public since the completion of the parking lot on Rte. 82 in July 2020, the official ribbon cutting was delayed because of the pandemic.

“This dedication has been long awaited, and we would like to thank the Johnston  family for their patience,” First Selectman Seven Mattson stated in his introduction. ” I’m glad to finally hold this ceremony. Discussions on the purchase of this parcel began back in 2016 and we are glad that all the parties stuck with the effort for 5 years … This piece fits exquisitely well into the green belt we are all continuing to develop in Lyme and across the region.”

The 250-acre Johnston Preserve joins a complex of 6 contiguous preserves spanning more than 1,500 acres called the River to Ridgetop Preserves. The preserves are part of the federally designated Eightmile River Wild and Scenic River Watershed, as well as part of the Lyme Forest Block, an Important Bird Area – a global program which identifies the most important places for bird populations. 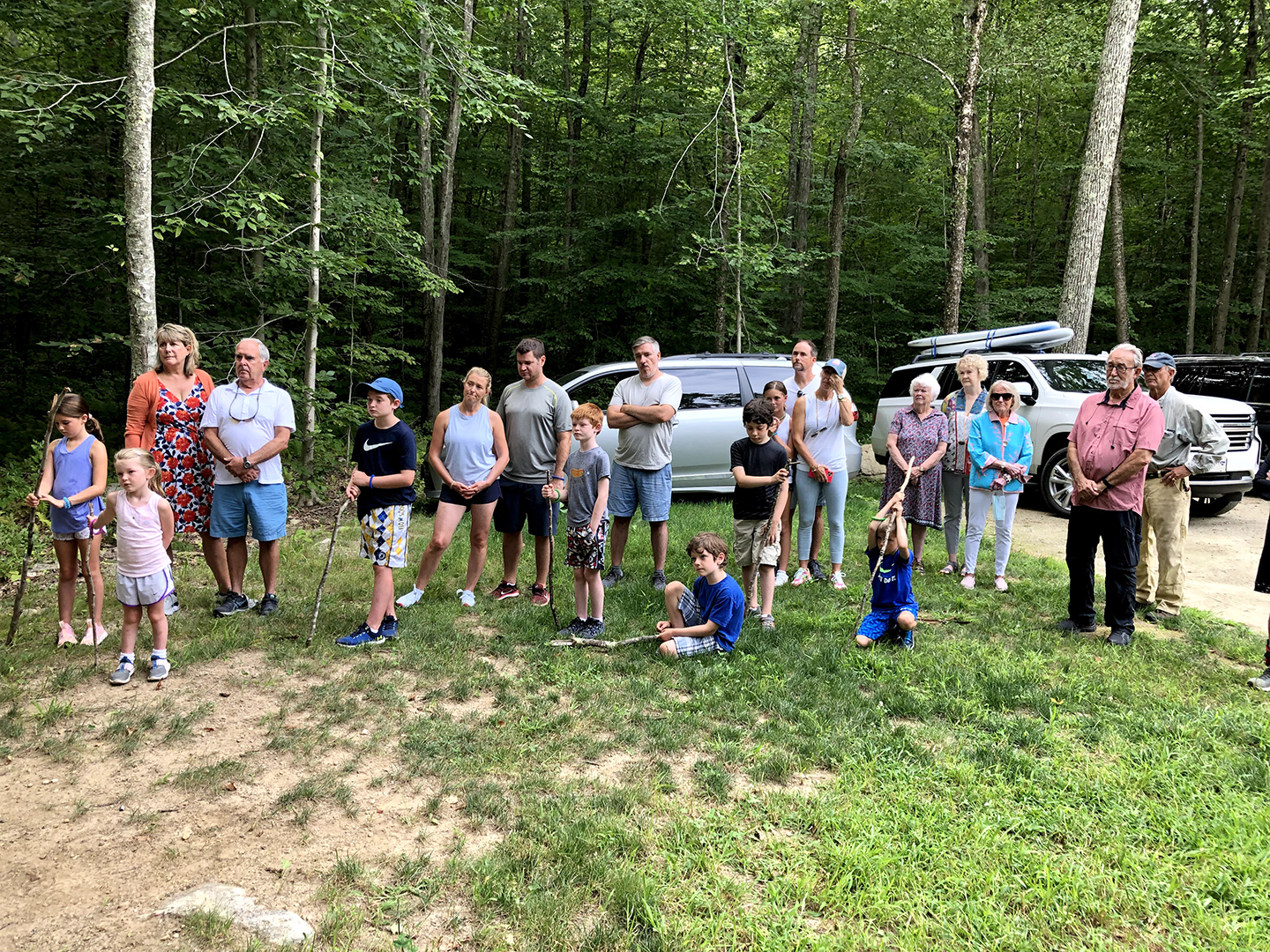 Family spokesman David Johnston related the family’s longtime commitment to protecting the land. His grandfather Henry Selden Johnston had the foresight to acquire several parcels in Lyme and Old Lyme in the early 1900s, many of which are now protected open space.

When Henry bought the several lots that are now the Johnston Preserve, they were pasture. Now the preserve is a mature forest. It is evident by the pristine quality of the forest that long before the Town bought the property from the family in December 2018, the land had been well stewarded by the Johnston family.

David stated that the date of the dedication was of particular significance because “if our father was alive, he’d be 108 today.” David’s father, Philip Johnston (Henry Selden Johnston’s son) was born Aug. 18, 1913. Henry was an outdoorsman who loved natural open spaces and fostered that love in his children and grandchildren.

The ceremonial ribbon was cut by David Johnston and Selectman Parker Lord, chairman of the Open Space Commission, who was instrumental in the acquisition of the Johnston Preserve.

Forest ecologist Tony Irving, member of the Town of Lyme Open Space Commission and Lyme Land Trust board, introduced Sarah RobbGrieco from the OGFN, who presented a plaque to commemorate the Johnston Preserve designation as a “future old-growth forest.” Johnston is its 139th designated forest nationwide and its 3rd in Connecticut.

As the OGFN website explains, “Majestic forests that supported abundant biodiversity were this nation’s inheritance. The vast majority of those forests have now been removed or radically altered. It is time now to set aside a few forests and allow them to recover their old-growth characteristics. These “future old-growth forests” will be our generation’s gift to the generations coming after us. If we are able to reverse the decline in mature, native forests we will be the first generation to have done so.” 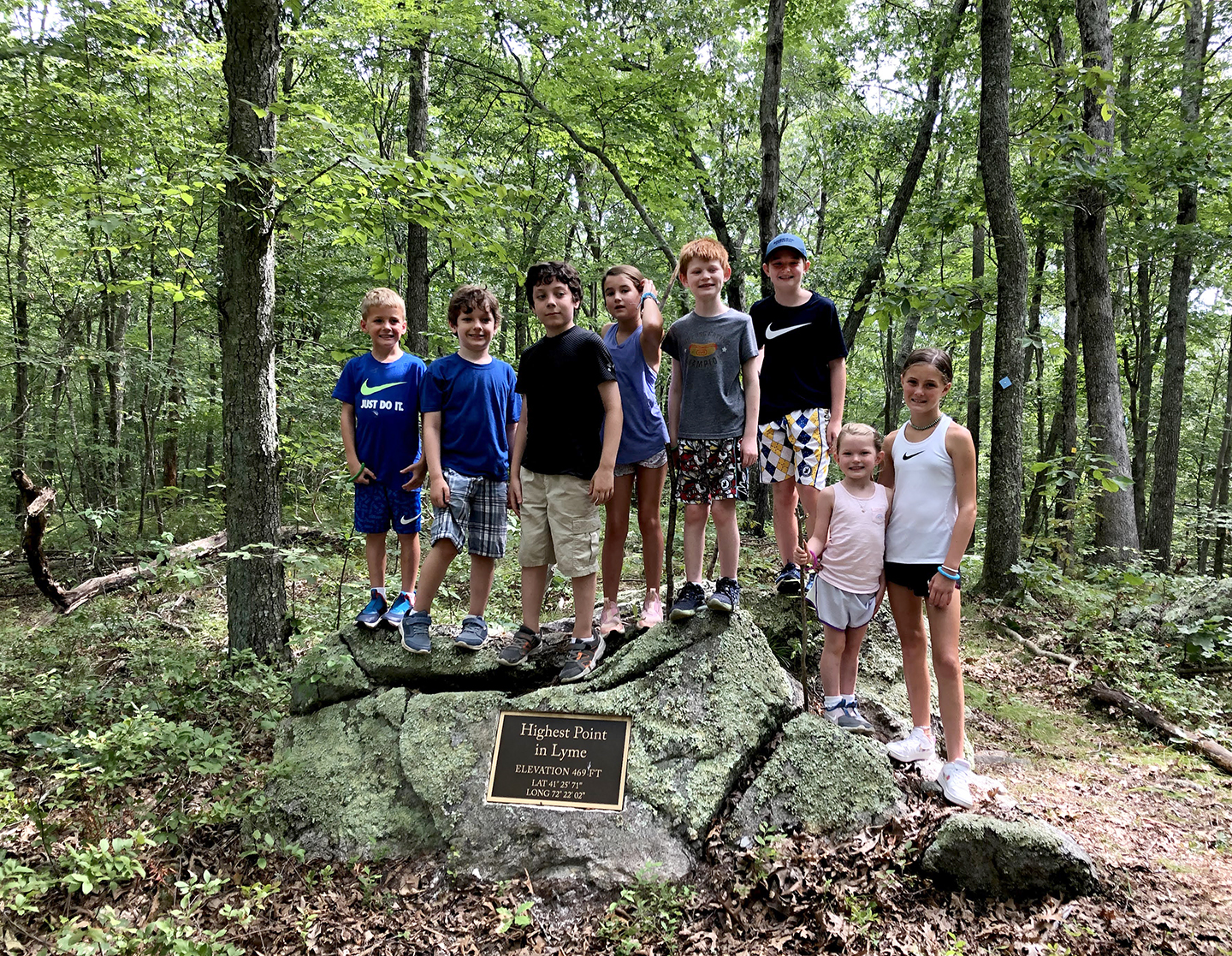 The 250-acre Johnston Preserve is a mixed hardwood forest in the 100-year-old range with a healthy variety of vegetation age and species. It has fascinating geologic features, from deep hollows to ridges with dramatic outcroppings and ledges, including the highest point in Lyme at 469 feet.

Mattson stated, “Volunteers, our Open Space Coordinator Wendy Hill and Tony Irving have created quite a trail system throughout the Johnston Preserve that connects” to the pre-existing trail network in the River to Ridgetop Preserves. The white trail gently climbs to breathtaking overlooks. The yellow trail traverses North Woods Hill, the highest point in Lyme. The fuchsia trail provides a 2.5 mile loop with fascinating features.

Thank you to the Lyme Land Trust, the Nature Conservancy, the Eightmile River Wild and Scenic Coordinating Committee, the State of Connecticut Open Space and Watershed Protection Program and many volunteers for their involvement. And in particular, thank you to the Johnston family for choosing to preserve this land in perpetuity for future generations.

The ceremony concluded with a guided walk. 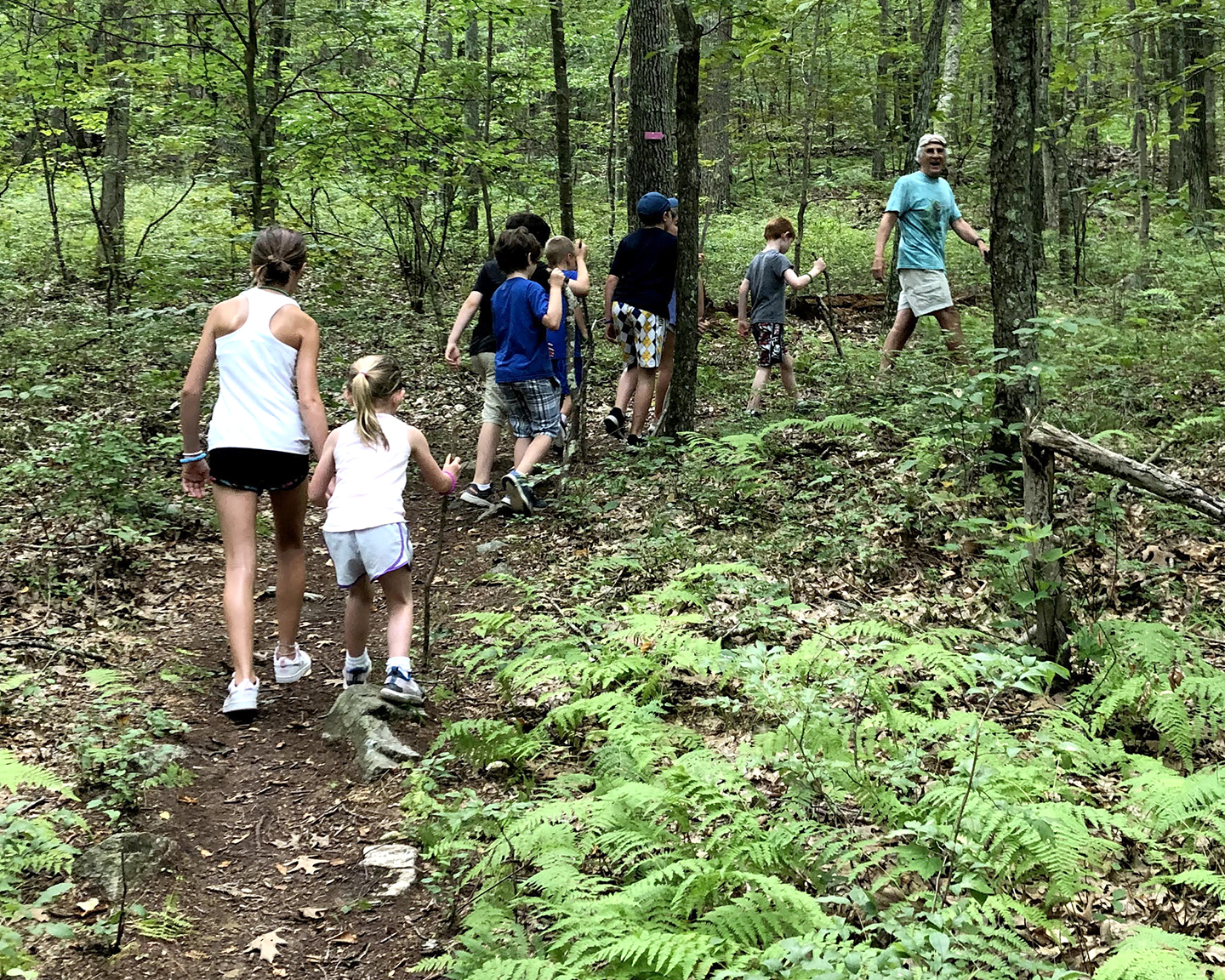 The Ledge Light Health District (LLHD) will hold a free vaccine clinic on Monday, Feb. 6, from 12:00 p.m. to 2:00 p.m., at the Lymes’ Senior Center.  The clinic will offer residents a choice of a regular flu shot (not a high dose) or a Covid vaccine shot or both.  The vaccines are available to anyone over the age of 18, with no cost requirement.  The vaccines will be offered on a first-come, first-serve basis until supplies run out.  The clinic is offering walk-up service only; no reservations will be taken.  Residents who want to receive the Covid vaccine should bring their Covid vaccination card with them.

(Meetings may sometimes be held on Zoom instead of in person at the senior center.)

On Monday, Feb. 27, at 1:00 p.m., at the Lymes’ Senior Center, the center will offer a free training session in the use of Automated External Defibrillators (AEDs), which will be led by two local emergency medical technicians (EMTs), Colleen Atkinson and Doug LoPresti.  The training session will explain how to recognize when someone is experiencing cardiac arrest and how to use this type of defibrillator.  The EMTs will also demonstrate how to use hands-only CPR integrated with the use of an AED while waiting for an ambulance to arrive.  The program is free and open to the public. To register for the free event, please call the senior center at 860-434-4127.

(Meetings may sometimes be held on Zoom instead of in person at the senior center.)